You will find all the details explained here

This article explains how you can link the data of iDoceo in your iPad with iDoceo for Mac.

If you have just downloaded iDoceo for Mac, as well as iDoceo for iPad and therefore you don't have any data yet, go to:
Options -> Cloud Links -> Synchronize data between your devices .
Activate this option on both the iPad and the Mac, you don't have to do anything else.
Data synchronization from now on is activated and you should never change these options again.

How to activate sync

1. On the iPad that contains the information:
Options -> Cloud Links -> Synchronize data between your devices.
As seen in the following screen .. 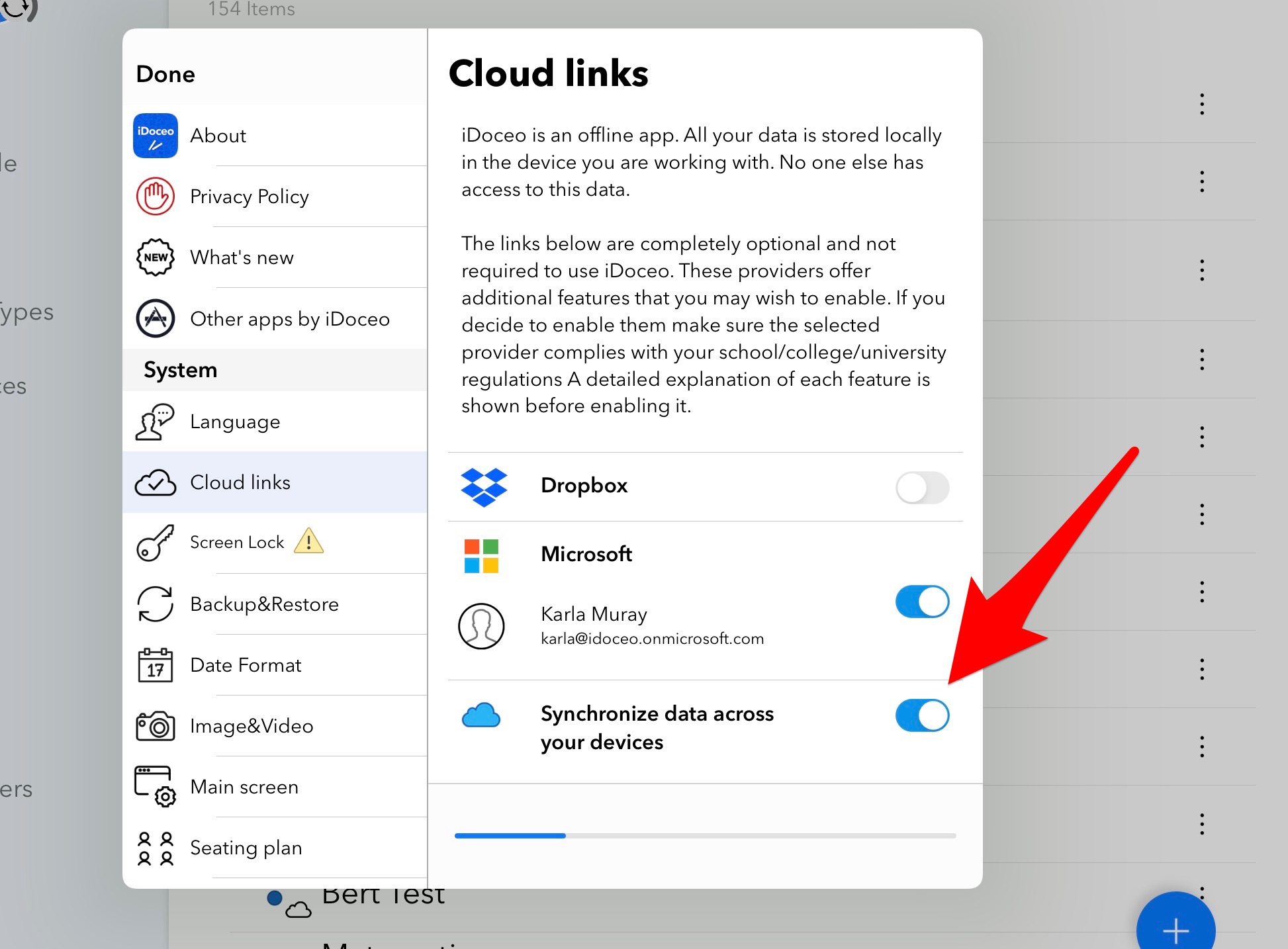 The process of data transfer to the user's iCloud begins.
While the transfer is taking place, the wheel shown below will be rolling and also sometimes at rest. When the wheel is green and fixed, the process is finished.

The duration of the process above depends on the amount of information contained in iDoceo and also on how fast the Apple iCloud uploads.
It could take several minutes or several hours .

How to activate sync

2. On the Mac:
Options -> Cloud Links -> Synchronize data between your devices.
As seen in the following screen ..

Synchronization on the Mac can be activated at any time after activating the syncing on the iPad.
When the green check appears both on the Mac and the iPad as well, the two devices will be synchronized.
The options used during this initial synchronization should no longer be used in the future.
If we activate the initial synchronization process again, once the devices were already synchronized, the result will be uncertain and data may be lost.
Once the two devices are synchronized, all the work carried out on iDoceo Mac will be automatically synchronized with iDoceo iPad and vice versa.
It is enough for both applications to be turned on and have access to the internet.
If one of the two devices, for example the iPad, has been without internet while you were working in iDoceo, it may take several minutes for the iPad to upload the new information to iCloud, once the internet connection is established again.

What NOT to do to sync two devices


1) Delete the iDoceo application from the device to reinstall it.
2) Try to synchronize two devices, making a Backup in one of them and restoring it in the other
By doing the first you will lose the data stored in iDoceo, by doing the second Apple can block your iCloud temporarily due to excess of traffic.

Size of the files or resources that are synchronized in iDoceo.

By default, only resources smaller than 15Mb are synchronized.
You can modify this limit from iPad Settings -> iDoceo -> Resource size limit.
The same should be done from the Mac.

How to send the whole data of one class to iCloud

When for some reason there is data in a class that has not been synchronized, even after the last changes you introduced are already synchronized. You can force to upload whole the information of that class into iCloud, using this option. 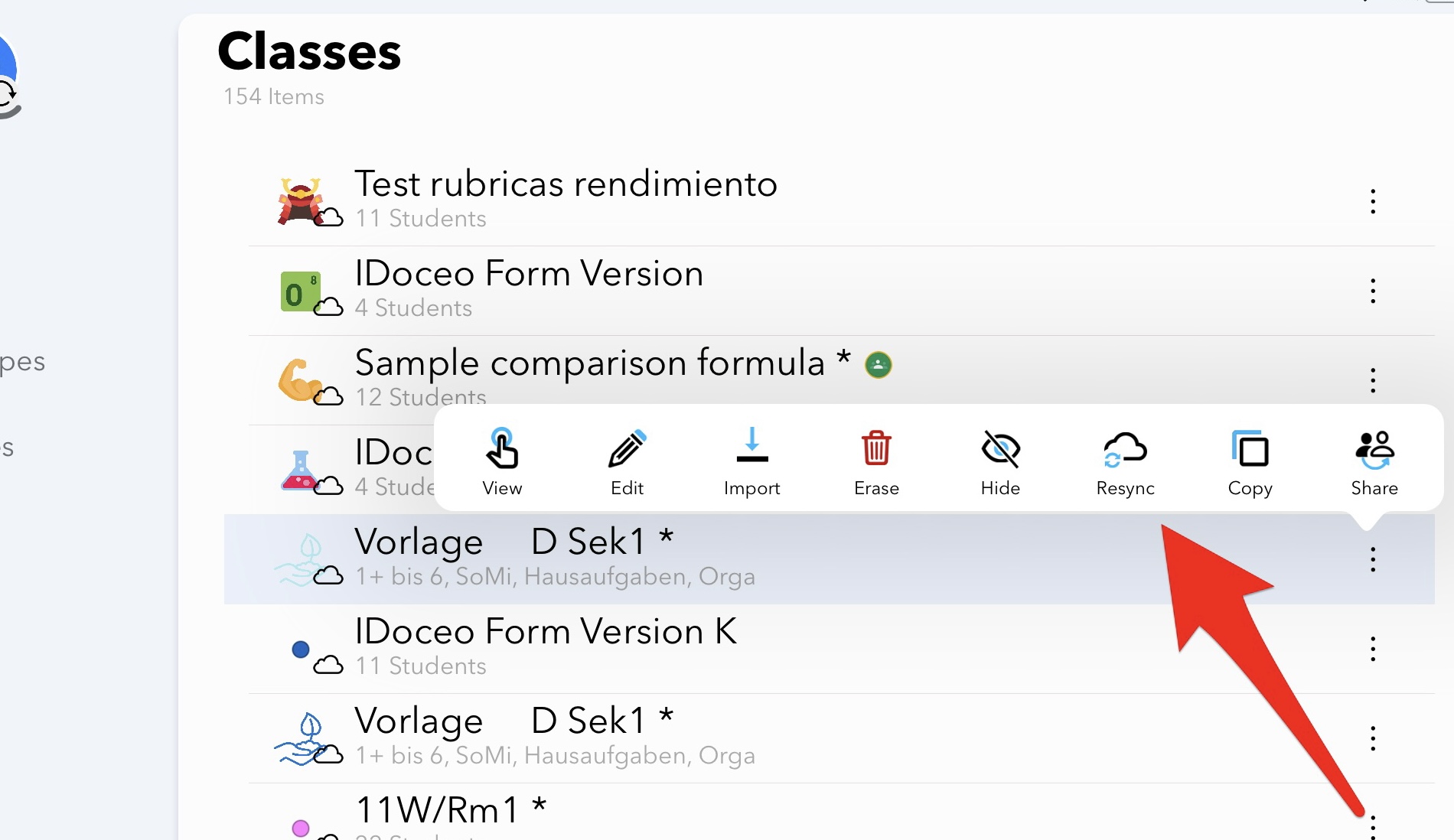 It is very important, this option to be used only from the device that contains your missing data, and also, NOT to be used as the regular way to syncronize.

In addition to self-evaluation rubrics, your students can now fill exams online. Supports text and images - in answers and questions - and can easily be imported from an XLS template

This website uses cookies to make it easier for you to use the forum. We do not track you for any kind of advertising or statistics. Cookies are only used to keep you logged in the forum in case you would like to post and to keep your language selection in case you use the automatic translation offered by Google. If you continue to use our offer and have activated this technology in your browser, you consent to the use of cookies.